The YET movement begins!

What would happen if we were to start an evangelism youth movement across Canada? What if all the youth in every church were trained and sent out to be a part of an evangelistic vision? What if we were to no longer meet just to entertain our youth and young adults once a week, but instead to challenge them to make evangelism a way of life for 52 weeks of the year?

If we invest in our youth, they will bring an evangelism movement to all our CNBC churches. When you give youth a challenge, they own it! They don’t ask questions about traditions, budgets and calendars, or expect to only use their way of doing things.

What if we let them lead and gave them freedom to plan their events with their young and new ideas? What would happen?

This year, God has led me to invest in the next generation. I have been praying and watching our youth in all contexts and I noticed that we need to challenge them with dreams beyond their own capacity and strength. They need a vision that comes from God and is empowered by the Holy Spirit. As I have been praying since we returned from Spain in April of 2017, God has been working.

It started with Thureos, a team of five youth led by Frank Aular at Emmanuel Baptist Church in Toronto. Frank challenged them to say “yes” to whatever challenge God called them to.

God first called these youth to plant churches. They did set up, led worship, served people and proclaimed the Gospel. Then they went on mission to the Dominican Republic to serve at an orphanage. It was here that God spoke to them and gave them a vision to reach lostness at all costs, to serve God full-time in whatever area He asked them to.

After returning to Toronto, Jose Urribarri, Gelvi Urribarri, Sara Urribarri, Veronica Carrera and Nathan Aular felt called to our seminary in Cochrane, Alberta. They drove across Canada in two days to visit the seminary, attending classes and confirming that this was the place God wanted them to be for the next four years. It was done! They all felt the calling and registered at our Canadian Southern Baptist Seminary & College.

One month into their first semester, they were part of the first Hispanic CNBC church plant in Cochrane. Again they helped set up, reach people and lead the worship every Sunday.

As I watched these youth serve to reach lostness, God placed a vision in my heart. YET!: a Youth Evangelism Team in every region, planning evangelism events where all youth bring lost friends to a high energy concert with games and drama. The Gospel is preached in a dynamic, clear way with an invitation to repent and pray to receive Jesus as Lord and Saviour.

Our slogan is “Not Finished Yet!” … until everyone has heard and had an opportunity to respond to the Gospel. We are not finished yet!

Our verse is Isaiah 49:6b, “I will also make you a light for the Gentiles, that you may bring my salvation to the ends of the earth.”

The first YET—Youth Evangelism Team­— was born in Alberta. It consists of youth from our churches and five students from our Canadian Southern Baptist Seminary & College.

On April 11–12 we had our first Live2Live event. The theme was “What are you living for?” A group of young men and women filled the sanctuary at Bow Valley Baptist Church. Many brought their lost friends.

Jose Urribari got the crowd going with his music, then Nico brought the house down with some break dancing moves as Sydney Fisher flipped five times across the stage and yelled, “Let the celebration begin!”

Daniel Spelliscy and David Ong sparked the atmosphere with encouragement and games. Jake York and his rock worship band got everyone on their feet to worship.

Next, a drama provoked the question, “What are you living for: to die or to live?”

The message followed and in the end the Gospel was proclaimed as a young man in the band sang “Just As I Am.” Seven youth repented and came forward to receive Christ as their Lord and Saviour. Eight committed their lives to serve God and others came forward to ask God to use them for missions and ministry.

After a movie and pizza, the girls went to the seminary to sleep and the boys slept at Bow Valley.

Saturday followed the theme with evangelism training. Rusty Ford, an IMB missionary in Spain, spoke about relational evangelism. Mike Blackaby was creative in his seminar, “The Art of Pre-Evangelism in Apologetics.” Dr Susan Booth, from our seminary, led a seminar on how to share the Gospel story. Paul Johnson spoke on telling your story effectively in less than five minutes.

I shared the evangelistic vision of D52, that youth will devote their lives to God’s Word, praying for the lost, directing their lives to lost people, developing relationships, declaring the Gospel and discipling the new believers. All the youth committed to live this for 52 weeks until the next Live2Live.

The second Live2Live event was held in Vancouver, British Columbia, on May 11–12. Five of our YET team from Alberta drove to Vancouver to help their team.

Almost 100 youth attended Live2Live Vancouver and three accepted Christ! Some came forward to commit to missions and others spoke to David Ong about going to our seminary in Cochrane.

After Live2Live, the Alberta YET team helped with WestCoast Baptist Association’s “Make Jesus Famous” event. Daniel Spelliscy led training for youth leaders on Saturday. David Ong and Jose Urribarri did a wonderful job serving and promoting our seminary. Rebecca Parra and David Ong brought the sketch before the sermon. Our team also visited and preached at churches on Sunday.

YET Movement
The movement has begun! We now have a YET team to promote and organize outreach events and evangelism training for our youth. We will continue with the goal that every region will have a YET team established to develop young leaders with a missional heart.

Our next stop is Saskatchewan in September and Winnipeg in the fall of 2018. In 2019, the plan is to reach Montréal. In 2020, at the Toronto CNBC Annual Convention, we will bring in all the YET teams and their youth to have our first national Live2Live event. The youth will come together to reach the city for Christ by helping the churches with outreach events.

We have a dream that God will start a movement across Canada, with our youth and young adults, to impact Canada and the world with the Gospel of Jesus Christ so that God can truly say to us: “I will also make you a light for the Gentiles, that you may bring my salvation to the ends of the earth" (Isaiah 49:6).

Pray for our team and the future of our CNBC.

This is the vision: “Not Finished Yet!” … until everyone across Canada and the world has heard the Gospel of Jesus Christ!”

Reprinted from the June 2018 CNBC Horizon, “Be My Witnesses!” by Cesar Parra. Read more here. 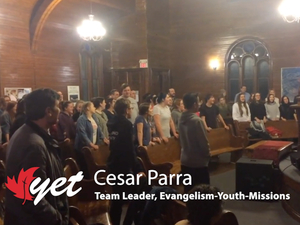 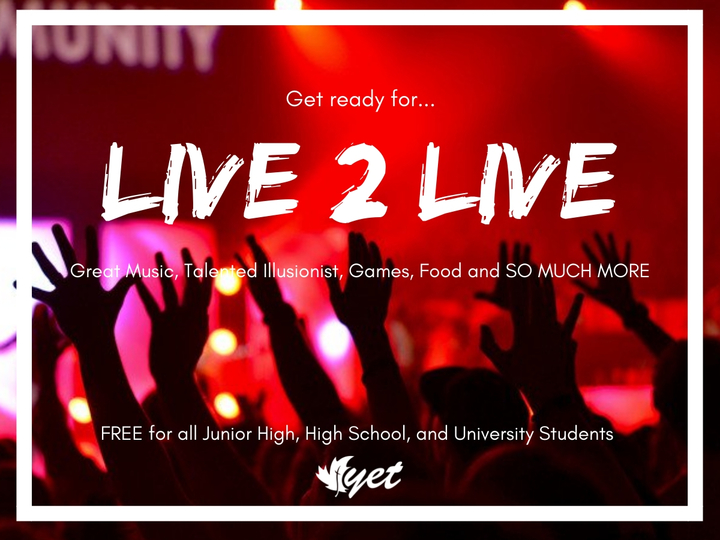 Get ready for LIVE2LIVE in your region!